In a continuation of their program to offer the most innovative and mission-oriented rifle ammunition for law enforcement, Hornady Manufacturing Co. has introduced two significant product additions. This new ammunition includes a new 5.56mm (not .223 Remington) round with improved case and bullet design, and a most welcome introduction of two loadings for the 6.8 Special Purpose Cartridge (SPC). The Police Marksman was among a selected group of law enforcement publications who received this new ammunition for testing.

Hornady's TAP line of rifle ammunition has become an industry standard for high performance law enforcement ammunition. Their 75 gr. BTHP TAP (Tactical Action Police) round in 5.56mm (.223 Remington) has been shown in numerous tests to be one of the most efficient and effective 5.56mm loadings available for the M-16/AR-15 family of weapons. It has proven effective in roles as divergent as a police patrol rifle ammunition to a close-distance entry round. Its on-target performance would be difficult to improve. Therefore, Hornady's product improvement orientation was to functionality, especially in the increasingly popular M-4 type carbines. 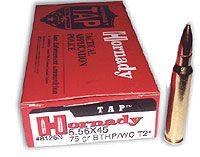 Readers may ask, why design a round specifically for the M-4? A question that surely was asked of Hornady and their response, with this improved ammunition, becomes clear when it is evaluated with respect to its features and benefits. Since the introduction of the M-16/AR-15 family of weapons, law enforcement agencies have been constrained to use commercial loadings in the .223 Remington caliber for duty ammunition.

While this cartridge's use in weapons that had 5.56mm NATO chambers was generally successful, the M-16 weapons system puts demands on the cartridge that were never experienced and anticipated in non-law enforcement use. The M-16 system presents stresses in loading, firing and ejection not encountered when the .223 Remington commercial loading is used in bolt-action type firearms.

These stresses include a feeding cycle that impacts the bullet in the cartridge case (potential push-in of the bullet), an extraction cycle that features an extraction/ejection system that grabs the case rim and rapidly pulls the case to the rear and then hits that rim with an ejector button. Because of the systems' direct gas action, i.e., gases from the firing round are fed back into the operating mechanism to function the gun. Certain types of gunpowder cause varying degrees of gas residue build up in the mechanism-when more residue is present, it impacts the feeding, ejection/extraction cycle. Additionally, due to some subtle differences in its functioning cycle, the M-4 carbine may add to these problems.

Few end-users of the M-16 system realize that the M-4 has some design differences that make it far more sensitive to ammunition design and loading than the full size M-16 rifle. In his excellent book-a must read for every law enforcement M-16 weapons user-Black Rifle II - The M16 Into the 21st Century, Christopher Bartocci clearly identifies this problem beginning on pg. 69. Bartocci writes, "Failures to feed had been noted in standard M16A2 rifles on occasion, but this condition was much more common in the carbine variations.

The root of the problem was found in a combination of the higher cyclic rate (and hence bolt velocity) and the shape of the M855 projectile itself. Dimensionally, the 62-grain M855 ball projectile is longer and heavier than the 55-grain M193 projectile, so the centers of gravity differ. In addition, the M855 has a noticeably flatter secant ogive, and thus a sharper tip radius, than does the less-aerodynamic M193 with its rounder tangent ogive. It was suspected that these parameters were affecting the feeding process, which was already affected by variances in magazine reaction, the time needed for the shot column to be moved up by the follower and spring.

This takes longer with a full 30-rd. magazine and speeds up, as does the cyclic rate, as rounds are expended. Because of the higher bolt velocity and the resulting more rapid forward motion of the feeding cartridge, the nose of the heavier M855 bullet did not have time to rise enough to enter one or the other of the feed ramps on the barrel extension, and the bullet noses were stubbing on the upper receiver under the barrel extension, causing failures to feed…to cope with this, the angle on the feed ramp cuts in the barrel extension was altered from 45 degrees to 52 degrees and the two half moon ramp cuts were themselves extended down into the vertical face of the upper receiver, below the barrel extension." Bartocci also identifies extraction/ejection issues caused by M-4 design. All of these problems have been addressed and corrected to some degree, but the fact remains that the M-4 design is more "ammunition sensitive" that its big brother, the M-16 rifle.

So what did Hornady do to address these issues? First, their attention was directed to the cartridge case. Because of the M-16 system design, during the loading cycle, the free floating firing pin comes forward and lightly dimples or ticks the primer. Obviously primer sensitivity is an issue, and with commercial primers, the possibility of an unintentional discharge is present. To remedy this, Hornady has gone to a MIL-SPEC primer and crimped it in the case to preclude back out.

This crimping necessitates a somewhat heavier case head, which is more robust and resistant to deformation during the loading/extraction/ejection cycle. And because of bullet design and chamber pressures set to military standards, the case head of the new T2 ammunition is marked '5.56mm NATO' and the cartridge is specifically designed for use only in 5.56mm (not commercial .223 Remington) chambers.

Next, Hornady looked at the M4 gas system and its dimensional differences from the full size M-16 rifle. The cycling differences are addressed in Bartocci's book, and Hornady recognized that functioning pressures at the cartridge case mouth and at the barrel gas port were critical in the M4, and subsequently chose a propellant that conforms to MIL-SPEC M855 ammunition pressures for use in the M4.

Lastly, Hornady redesigned their 75-grain BTHP design to a unique ogive shape designed to facilitate feeding in the M4 weapons system (and it works equally well in the full size M-16/AR-15 rifle). Then a cannelure was added to the bullet to facilitate case mouth crimping and resulted in bullet push/pull forces that meet or exceed MIL-SPEC M855 specifications. And with all of these improvements, accuracy specifications of 1 MOA (minute of angle) in a 20" 1-7" twist barrel were maintained.

With the introduction of the new T2 ammunition, Hornady completed an exhaustive series of tests of the ammunition through various barrel lengths and in expansion/penetration tests. Those results are shown in tables #1, #2 and #3. (See Below)

The Police Marksman Advisory Staff functioned the 500 rounds provided through several M4 and M16/AR15 type weapons without the slightest indication of a malfunction. Accuracy was superb.

In the March/April 2005 issue of The Police Marksman magazine, noted law enforcement weapons and ammunition writer Sheppard W. Kelly wrote about the newly developed 6.8 Special Purpose Cartridge (SPC) recently introduced by Remington. Kelly identified this cartridge, which was developed to address a battlefield need for military special operations troops, as perhaps the best all around rifle cartridge for law enforcement ever developed. Due to a series of missteps, ammunition available to the law enforcement community was scarce and over the counter weapons systems suitable for law enforcement use, virtually nonexistent.

DPMS, Inc., of St. Cloud, MN who introduced their M-4 carbine in 6.8 SPC in 2004, addressed the weapons issue. And while dribbles of Remington ammunition would periodically appear, no quantities were ever available that would justify any LE agency seriously considering the weapon. This year, Hornady Manufacturing has stepped in and solved that problem.

Hornady has announced two loadings for the 6.8 SPC with different bullet designs and a redesigned 6.8 SPC-cartridge case. The Police Marksman staff was provided a quantity of the ammunition for field testing, along with an extensive body of data from tests conducted by Hornady. Hornady used their excellent 110-grain V-MAX and a newly designed 110-grain Boattail Hollow Point as their cataloged bullets weights and designs.

They added a cannelure to the bullets to preclude push-back during the feeding cycle and in order to strengthen the cartridge case head, Hornady utilizes a small rifle primer instead of the large rifle size of the original cartridge design. This makes for a stronger case head to withstand the rigors of the M-16 weapons extraction and ejection system and to preclude primer back out, a crimp was added.

Table #4 (See Below) attests to the performance of the 6.8 SPC loading from Hornady. Accuracy as measured from the 20" DPMS SPR was 1 MOA on average, and in functioning of over 200 rds, not a malfunction of any type was noted The broad spectrum use potential of the 6.8SPC makes it a natural for law enforcement use-in what other cartridge/weapons system can you have an efficient CQB, patrol rifle and precision rifle application all in one cartridge in the M-16 weapons family? With Hornady's commitment to this caliber, it is hoped that more agencies will evaluate the 6.8 SPC.


Hornady Manufacturing Co. has historically been noted for the production of quality tools for reloading, and when they embarked on the manufacture of ammunition, those same high standards were maintained. Hornady has elected as a corporate policy; to address the needs of the law enforcement community through the design of performance enhanced loadings for law enforcement use. Hornady is the only ammunition manufacturer that conducts a training program for law enforcement personnel-the Hornady Law Enforcement Rifle Course-and incorporates feed back from that course in their ammunition development. That course identifies what works and doesn't-performance information that drives excellence in their ammunition production. Hornady Manufacturing is a company dedicated to serving the needs of the LE community by providing a quality ammunition product, based on input from those who serve and protect. 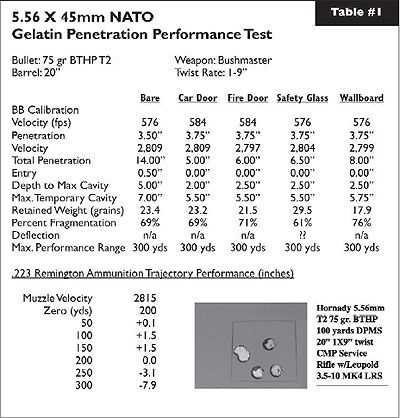 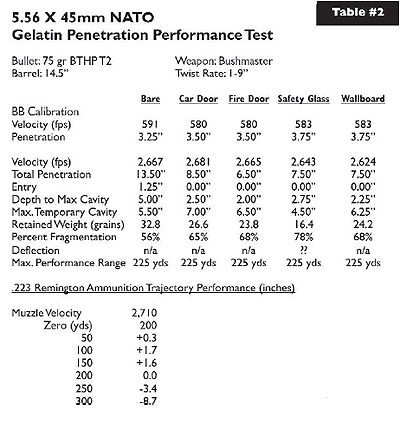 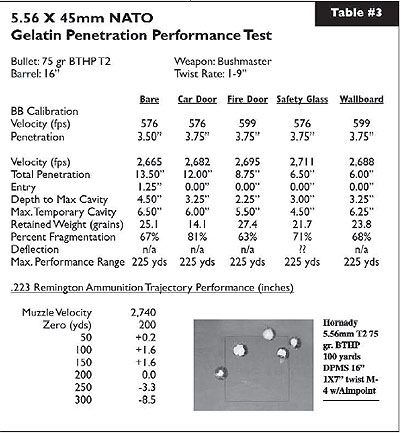 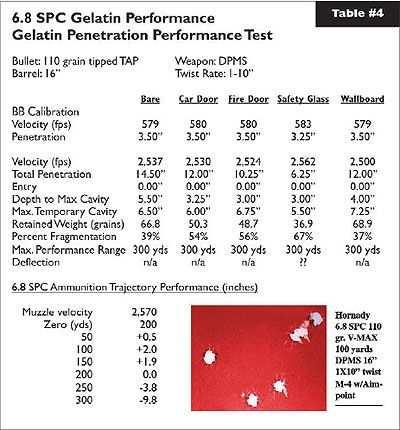