Women in corrections: An integral asset for all units

C1 Poll: What would you do if you couldn't be a correctional officer?

There’s no question about it – correctional officers have a stressful job, if not one of the most stressful jobs in America. You can go from patrolling a pod and overseeing seemingly complacent inmates to suddenly being attacked on a moment’s notice, without warning. You work holidays and days off, spend “free time” trying to get some sleep and decompress from the horrible things you see behind the walls, get cursed at, spit on, and verbally abused by inmates that you’re charged with protecting, all for little pay – and that could just be Monday.

5 considerations before you become a correctional officer

If you're thinking about becoming a correctional officer, here are some things you need to think about first

Hundreds of CorrectionsOne readers were asked if they would do it all over, would they choose to become a correctional officer again? More than 60 percent confirmed there was no other job for them. 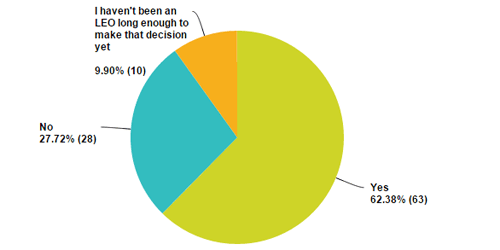 But for those who were forced to choose what’s next, whether due to injury, the politics of the job or from burnout, here’s what they would have picked: 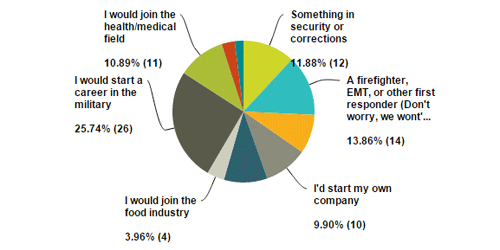 A little over a fourth of respondents would choose a career in the military, but results were spread fairly evenly across the board.

Many correctional officers already double as volunteer firefighters or EMTs in their towns, so it’s no surprise that many would choose to be a first responder if they couldn’t be a CO.

Unfortunately, less than four percent of officers were less than willing to show off their culinary skills, but with the reputation prison food has, maybe that’s for the best.

C1 Poll: How physically fit are you?

Poll Results: What's the best state a corrections officer can work in?